The latest Trends in Mathematics and Science Study (TIMSS) data has been released. At first glance, it looks like New Zealand’s maths scores have improved since 2010, but unfortunately we cannot be certain of this. The scores are published with a statistical margin of error, which means that if we were to run the survey again with different samples of children, we might not see the same “improvement”. If we include the published margins of error, we see overlapping bands of achievement rather than increasing lines from 2010 to 2014. In fact, over 20 years, New Zealand’s performance has been disappointly consistent. We’re still below average. 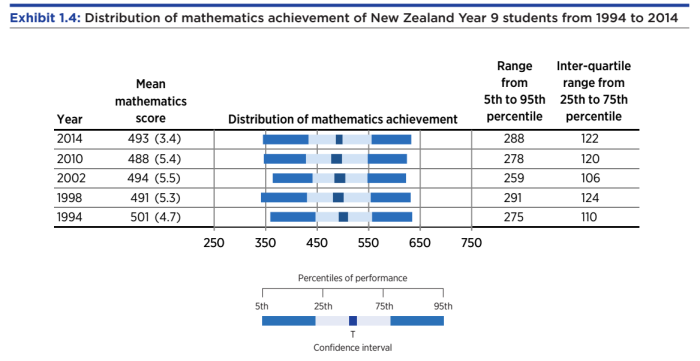 The Ministry of Education has been honest and sober in its reporting, but nevertheless, the Minister of Education has said, in congratulatory tones, that average scores had increased! How can she claim there is an improvement when her own officials say that scores haven’t changed?  Is she wilfully ignoring them, or does she needs a lesson on how to interpret statistical reports?

There was some encouraging growth in Year 5 students working at an “advanced” level, but at the other end of the spectrum, less than half of the student samples were working at the desired level of mathematics in the New Zealand Curriculum, and when looking at only the TIMSS questions which fit with New Zealand curriculum expectations, the average student answered just under half of these questions correctly. We have a high proportion of under-achieving students compared to other countries, and at the Year 9 level, this proportion has grown since 1995.

The Bring Back Column Addition Campaign was launched in response to New Zealand’s poor performance in TIMSS 2011(*). It would appear there is no reason to stop campaigning. We asked for some simple, pragmatic changes to the curriculum that would allow under-achieving students to progress. Without them, any improvements are likely to remain statistically insignificant.

(*) Internationally, TIMSS data is labelled by the odd-numbered years in which students in the northern hemisphere are assessed.  New Zealand students are assessed at the end of the year prior, hence the even-numbered years referred to in the Ministry’s reports.