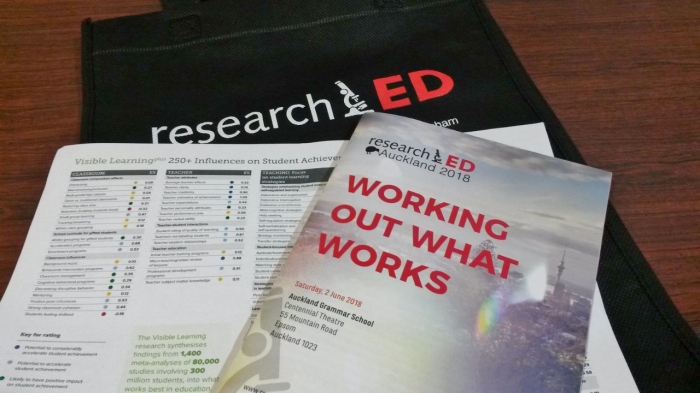 Isn’t it crazy that, in 2018, we’re still “working out what works” in Education?

In fact, some of us do already have a pretty good idea of what works, but getting the right people to listen is a different problem altogether.

And so, a group of like-minded individuals (and maybe a couple of sceptics) gave up their Saturday on Queen’s Birthday weekend to attend New Zealand’s very first researchED conference in Auckland. researchED is a growing movement based in the UK but spreading internationally, “a grass-roots, teacher-led project that aims to make teachers research-literate and pseudo-science proof” (and by golly does this country need proofing). Founder Tom Bennett quickly realised that his own teacher training was based more on edu-myths and dogma (e.g. learning styles) than any scientific, evidence-based research.  He’s not the only one.  Daisy Christodoulou’s book, Seven Myths About Education, is the coffee that any waking 21st century learning fanatic should smell.  Briar Lipson at the New Zealand Initiative hasn’t spent very long in this country, but has already sized up our education system very well and should be commended for bringing researchED to New Zealand.

Every talk raised serious questions about how we teach in New Zealand, and everyone was there in the belief that we can, and should, be doing better.  Not surprisingly, the academics are calling for the Ministry of Education to change their ways and look for evidence before adopting fads as policies, while the pragmatic principals and teachers cannot afford to wait and are simply getting on with things.

The common factor of the day was subject knowledge and the importance of committing knowledge to long-term memory.  The 21st century learning ethos suggests that we should leapfrog, or at least skim over, these foundational skills in a bid to produce generic critical thinkers and problem solvers, but surely common sense tells us we cannot reasonably expect students to think critically or solve problems unless they actually have some knowledge to work with.

I have no desire to repeat what has been said so well by others, so instead I will direct readers to a newly created blog by Derek Hopper, a music teacher at Tauraroa Area School who has read up on what works and is spreading the word.  He and his colleagues are seeing significant improvements in student behaviour and achievement. Happy students, happy teachers.  Having already spoken to a maths teacher at Tauraroa who is offering guidance to their primary teachers, I believe this school may well provide the model for other schools to follow.

Some other reflections of the day:

Tom Bennett, founder of researchED: Teachers might think that indulging in (catering for individual) learning styles is a harmless bit of fun, but there is no time to waste when teaching children from disadvantaged backgrounds.  Every minute counts.

Katharine Birbalsingh, keynote speaker and founder/Headmistress of the evidence-informed Michaela Community School in London: Her teachers do not play “Guess what’s in my head?”, i.e. they don’t question their students before the relevant knowledge has been taught, so that every student, regardless of their background, has an equal chance of answering the teachers’ questions correctly.  A subtle but powerful way to address social inequity and level the playing field.

Dr. Michael Johnston, Victoria University: When new skills are learned and practised sufficiently, they become automatic and free up the working memory to concentrate on higher-order thinking.  With particular reference to mathematics pedagogy, the current NCEA internal assessment system provides little incentive for students to practise skills and procedures to the point of automaticity, and if they haven’t reached that point, then they will struggle with the cognitive demands of solving the contextualised problems presented in assessment.

Prof. Elizabeth Rata, Auckland University: Already widely known for her views on the lack of academic knowledge in the curriculum.  When she used the definition of the apostrophe as an example of understanding the epistemic structure of academic knowledge, I genuinely thought she was going to ask the audience if they had spotted the misplaced apostrophe in the previous slide.  She didn’t.  I suddenly felt alone.

Dr. Graham McPhail, Auckland University: There is little evidence that deep learning occurs through subject integration.  Wineburg and Grossman (2000) warned that ‘often the choice to implement a new curriculum is based on symbolic factors, such as a desire to be seen as progressive and in the forefront of reform’.

Louise Zame, primary school teacher:  When listening to a teacher speak so eloquently about the professional challenges of implementing Inquiry Learning…to a bunch of 5-7 year olds…you realise just how much the Ministry of Education has lost the plot.  As part of her Master’s research, Louise asks the pertinent question: what content knowledge do young students (aged 5-7 years) gain through inquiry learning?

Dr. Shaun Hawthorne, Cognition Education Ltd: Prof. John Hattie has recently updated his list of influences on student achievement, and top of the list is now “collective teacher efficacy” with a whopping effect size of 1.57.  For those who don’t know about Hattie’s effect size measure, almost everything on the list has a positive effect, so teachers and schools should not be too complacent. They should be looking to maximise their impact, and punching above the average effect size of 0.40.